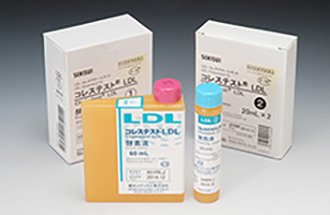 Cholestest LDL is a liquid reagent for the measurement of LDL-cholesterol concentrations using differences in affinity between lipoproteins and detergents. It requires no fractionation steps and can be used on various automated analyzers. It also shows a high correlation with the ultracentrifugation method.

*Read carefully the package insert before use.

According to the UKPDS, LDL cholesterol and HDL cholesterol rank number 1 and 2, respectively, as risk factors for coronary artery diseases in patients with type 2 diabetes. At the very least, the study suggests that hyperlipidemia has a greater effect on longevity than hyperglycemia.

Comparison between ultracentrifugation and direct methods

LDL-Cholesterol, the so-called “bad” cholesterol, is said to be contained in large quantities in blood of patients with cardiac or cerebral vascular diseases, and increases with age.

“Cholestest” is a trademark or registered trademark of SEKISUI MEDICAL CO., LTD. in Japan and/or other countries.